Getting this software to work is especially nice, because modern Linux distributions have great USB support, and the programming cable I used was immediately recognized! Just be sure to select the appropriate serial port.

Although unlikely, it may be necessary to manually link the emulated USB serial port to the COM1: port of the Wine emulator. This is easy enough from the command-line:

This sets the configuration to force COM1: as the USB serial port. Put "sudo" in front of the command if you do not have root privileges. In any case, type the command-line exactly.

The screenshots are shown in my Flickr photo gallery titled "Amateur Radio Linux Screenshots Programming Software". They simply show the programs VTBVX3 and FTB60 installed, nothing more. But these programs do work as well here as they do in Windows! Perhaps better :-)

A final note regarding licensing: This happens to be running on a dual-boot Windows XP/Ubuntu Linux box; one of over a dozen computers I use. Being dual-boot, it is physically impossible to use these programs on both "systems" at the same time. So, it obliges the one-machine/one-user at time rule. No cheating here. And I am delighted to support a fellow developer and ham. 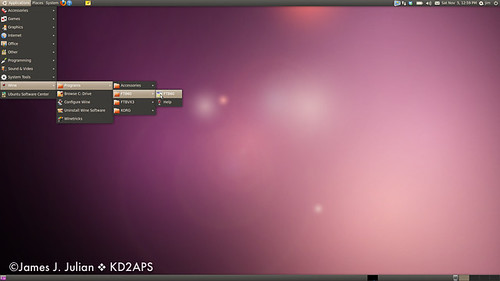